As Dems sprint against the clock, child tax credit might slip away

Democrats are hoping a year-end cliff with 35 million families on the line can finally shake a deal loose on President Joe Biden’s marquee bill.

Preserving the party’s expanded child tax credit, which delivers monthly checks to most families with children, has been a central tenet of Biden’s social safety net bill from the start. But months of grueling negotiations have forced Democrats right up against the Dec. 31 deadline that could blot out one of their biggest political wins this year.

Still, Democrats are hopeful that if anything can unify the party — and convince their chief skeptic, Sen. Joe Manchin (D-W.Va.), to vote for the legislation when it comes to the floor as soon as this week — it would be a historic anti-poverty effort for kids.

"You need a deadline. The end of the year, that’s the focus in my mind,” added Sen. Sherrod Brown (D-Ohio). “It’s as important a thing as there is in the Build Back Better [bill], and to me it was the most important thing we did in calendar ‘21. So it’s essential and we’re going to keep it.” 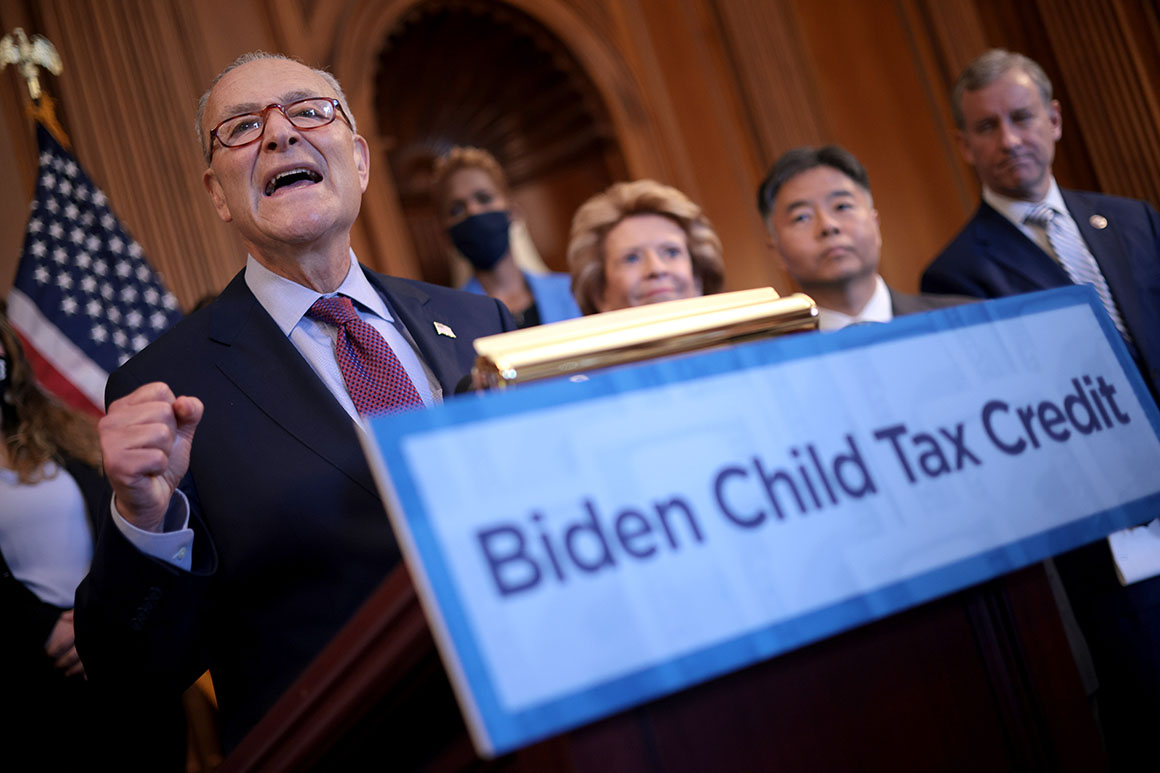 Manchin, who at times has alluded to the expiring boosted tax credit as something Congress must deal with, could soon face their put-up-or-shut-up moment. In the final days of the year’s chaotic legislative calendar, Senate Majority Leader Chuck Schumer is pushing for a floor vote by Christmas on Biden’s multi-trillion-dollar climate and social spending package.

The Senate averted a government shutdown this month and is on track to suspend the debt limit. The chamber is also expected to soon approve the annual defense policy bill, clearing its docket for the social spending plan.

And Democrats are showing signs of steady progress; several Senate committees have released draft text and CBO scores. But there’s no complete legislative text for the bill. The Senate parliamentarian is still reviewing key parts of the House-passed legislation, including immigration reform and certain drug pricing provisions, to ensure that they comply with upper-chamber budget rules. That’s on top of still-outstanding issues within the party, like reaching a compromise on state and local tax relief.

Some Democrats are privately doubtful that the social spending plan will pass the Senate by Christmas, given the remaining logistical hurdles and the dwindling days left to work.

While some lawmakers have said the child tax credit could potentially be addressed in early January if talks spill past New Year’s, not everyone agrees. The IRS recently told Senate Democrats that they need to pass the extension before Dec. 28 for the payments to go uninterrupted, according to a party aide.

“If we act beyond December, you can make it retroactive, but I just think it’s important to get the bill done this month,” said Sen. Bob Casey (D-Pa.). “I think we’ve got plenty of time.”

Then there’s the question of whether all 50 Democrats are ready to support the bill. Both Manchin and Sen. Kyrsten Sinema (D-Ariz.), whose votes Democrats need, have not publicly committed to advancing the legislation. Manchin has repeatedly expressed concern about rising inflation, and that was before data released Friday showing inflation at the highest level in the U.S. in four decades.

The uncertainty surrounding particularly Manchin’s position has prompted some Senate Democrats to push for a floor vote even without a final commitment from him.

Included in the bill is a one-year extension of the Democrats’ child tax credit program, which they created as part of their March pandemic stimulus measure. Since July, all but the wealthiest U.S. families have been eligible to receive those tax benefits in the form of monthly checks of $300 per eligible child — which progressives have hailed as a key step toward their goal of guaranteed income for families with children.

“We’ve got to push and remind people that there are impacts like the child tax credit if the bill doesn’t pass by the end of the year,” said Rep. Suzan DelBene (D-Wash.). She leads the center-left New Democrat Coalition, which has vocally pushed party leaders to take up the package before Dec. 31.

“I want to make sure everybody’s keenly aware there are consequences of waiting,” DelBene added.

Democrats are in near-unison about the need to renew their program by year’s end. That’s not only because of the obvious effect on families who have relied on the extra cash since the summer.

Some in the party, particularly those holding House swing seats, have grown increasingly anxious that they’ve dropped the ball on educating voters about who’s behind the bigger tax credit. While the party pushed to encourage as many families as possible to take advantage of it, an NPR/Marist poll last week found that roughly six in 10 eligible households had received the payments. Democrats previously estimated that nearly 90 percent of families were eligible.

Any disruption in those checks may only further muddle the politics of what many Democrats still consider one of their biggest victories of the year, citing studies that show the bigger credit has lifted millions of children out of poverty.

“Why stop something that’s good? Let’s get the bills done that we need to move this forward with, and be done and help those families,” said Rep. Cindy Axne (D-Iowa). “We’re going to make this happen.”

It’s not just the year-end tax credits that have Democrats gunning for a deal before New Year’s.

There’s also the usual midterm-year drag that slows down congressional action, particularly in a year where Democrats can’t lose a single vote in the Senate and only have a handful to spare in the House. It’s precisely that narrow margin in both chambers that have made it so tricky for Schumer and Speaker Nancy Pelosi to muscle through Biden’s enormous social policy bill this year.

House Democrats did narrowly pass the package just before Thanksgiving, losing just one Democratic vote after a monthslong slog as factions within the party clashed.

Things could get even stickier in the Senate, where Democrats have to not only cure the political headache of locking down Manchin, but also navigate a procedural thicket to pass the bill without GOP votes.

“There’s obviously something magical here that happens when people want to go home for Christmas,” said Sen. Chris Murphy (D-Conn.). As for the child tax credit deadline, Murphy said: “That still has to be our North Star.”

But others aren’t so sure. “I’ve been skeptical for some time that it could be enacted by the end of the year. It just doesn’t seem like there’s enough time,” said House Budget Chair John Yarmuth (D-Ky.).

Asked if he feared it wouldn’t get done in time, or at all, Yarmuth said: “Sure. I mean, we’re dealing with the Senate.”

Videos showing a Brazilian man dying while trapped in the boot of a police car have sparked anger and protests in Brazil.

A portrait of the Queen painted by a humanoid robot artist has been unveiled ahead of the Platinum Jubilee.

Sky's Beth Rigby speaks to Conservative minister Jacob Rees-Mogg about the cost of living crisis, partygate, and not being able to cook.

Questions are being asked about how much time elapsed before police stormed a Texas primary school classroom to end a rampage by a gunman inside.

‘The fun behind the formality’: Queen shares family home videos for the first time

The Queen has allowed the world to see "the fun behind the formality" of her royal life in home movies that have been released for the first time.